Congratulations to the The Fulton Flyers who have recently been crowned champions of Scotland in this summers Last Man Standing cricket competition.

A closely-fought final against Carlton that stretched into the final over at the Inch Park venue in Edinburgh, before one of The Flyers co-captains Mo Ali hit the winning runs to start the celebrations and bring the trophy home to Glasgow.

The win also means a guaranteed spot, and a chance for the Fulton Flyers to represent Scotland, in the LMS World Championship which is being staged in Cape Town, South Africa in December 2017.

A big thanks must go to the Fulton Flyer’s manager Mike Stanger for making the first season such a success, and off course to all the players at Clydesdale Cricket Club that contributed through out. 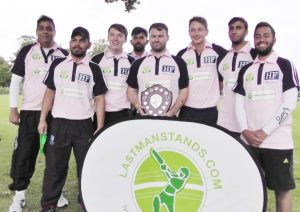 Results on route to the final.

For more information about the The Last Man Standing competition click here.

Friday the 5th marked the opening day of the Edinburgh Fringe Festival. While we love a good laugh, ensuring that the venues, pubs, clubs and restaurants across Edinburgh that depend on the tourism peaks of the festival are all able to operate continually is no laughing matter. We take it very seriously. From electrical testing […]